Celebrating its second anniversary, ArtWorks, the collaborative for local painters, designers and sculptors has not only nurtured its own artistic community but spawned studios outside of its 7,500 square-feet of warehouse retail space. 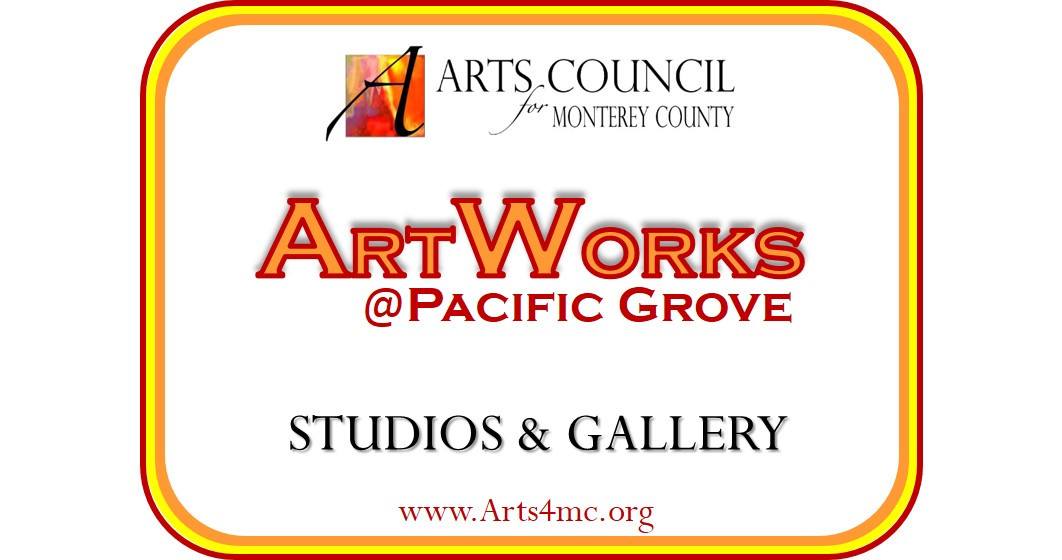 Located inside Pacific Grove’s American Tin Cannery Outlets, the art studio/gallery displays works ranging from oil-on-canvas to mixed media collage. It has become a haven for both life-long artists and novices needing a space to create and showcase their wares.

Having ArtWorks is what kick-started artist Bryan Gage’s fine arts career. Gage, 33, an “urban decay” artist describes his art as a “mixture of different styles.” While the former industrial designer started out with a space at ArtWorks, it took off so well he’s been able to open his own studio downstairs in the outlet mall.

He’s concerned what will happen if the building eventually becomes a hotel and displaces he and his fellow artists. 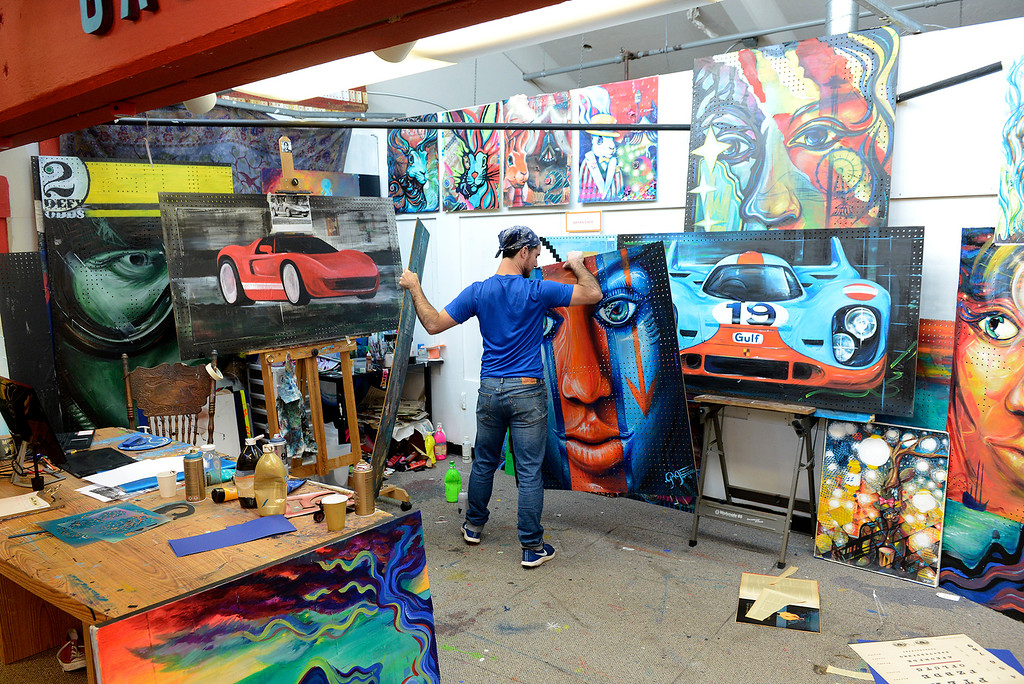 Like the other artists there, Gage has become accustomed to the echoing noises common to the old cannery-turned-indoor mall, which often includes crying children tired of shopping or waiting to eat at First Awakenings or Zoltar, the all-knowing animatronic fortuneteller beckoning patrons outside of Candy World on the mall’s main floor.

“Especially being a fine artist in an expensive area like this, ArtWorks and this space was paramount to getting me started,” said Gage, who grew up in Pacific Grove but left for years to study automotive design in England.

It was in April of 2017 that Jacquie Atchison, deputy director of the Arts Council for Monterey County, approached Foursome Development and the Cannery Row Co. (the owner of the building) with the idea to lease the space until hotel construction on the then-proposed Project Bella hotel would begin. But even after the project ultimately fell through, the collaborative has remained and really developed its community. Then late last year, Comstock, a residential and commercial development company with properties in both Southern and Northern California, expressed potential plans to build a hotel on the site at 125 Ocean View Blvd.

Whether it’s that development or another that could eventually take over the building, Atchison said the Arts Council ultimately wants a lasting place for artists to develop their craft. Currently, the space accommodates 16 artists. It has offered a Maker Art Faire, workshops, summer art classes and has an Arts Habitat Mixer planned for later this year.

“We would like a more permanent space since we don't know when they will start on the hotel,” said Atchison. “We'd like to provide more private, professional individual studios with a small gallery.”  She’d also like to expand with collaboratives in other cities like Salinas and Seaside.

Still, Artworks current artists, who are charged monthly rent at a rate of 50 to 75 cents per square foot for their space ranging from 100 to 400 square feet, just continue working on the art they love to create.

“It’s been really nice watching each artist and how they work and how they’re improving and expanding,” said Julie Franklin, who teaches Mandala workshops and incorporates symbols and symmetry in her mixed media works.

The former social worker from Orange County had wanted to move to the Central Coast but when she learned of ArtWorks and landed one of the last spots there, it solidified her decision. She soon will start conducting art classes for school-age children on the Peninsula. “We learn from each other and share our process with each other.”

For retired nurse Nancy Donaldson who spent 50 years in the medical field and is now fueling her passion for photography and mixed media collage, it’s about having the experience of being surrounded by career artists.

“Many of those here have spent much of their adult life pursuing their passion for art,” said Donaldson. “I came to it later in life – I’m on a fast track.”

She too is concerned about losing the space.

That’s while ArtWorks has allowed Stacey Ashton, a behavioral therapist in Pacific Grove and self-taught oil painter of both floral and portrait pieces, to branch out into artistic pursuits that are satisfying to her soul.

“This place has been a dream come true for me because I never could have afforded to do this at this point in my life – to have my own studio while working full-time,” said Ashton, who is drawn to painting flowers “because they express the fragility of life and are a beautiful symbol of the life experience.”

As one of the first tenants, Ashton recalled at one point being lonely enough in the ArtWorks space that the repetitive Zoltar and his fortune-telling promises kept her company.

But for Paul Seftel, whose original abstract paintings inspired by forces of nature are featured inside his own spacious studio at the American Tin Cannery, the community needs to take the arts more seriously.

Despite the paint buckets placed strategically around his studio, catching water from leaks caused by all the recent rains, Seftel is still appreciative to be there.

“This place (the ATC) is great – it is a bit of an incubator for the area,” said Seftel, noting that artists often have to rent from property owners knowing they are willing to “wing it” for the sake of having a place to do their art. “But where do artists really have the opportunity to hang works in this area? The Monterey Museum is

one place but there are very few galleries dealing with living artists and contemporary work.”

“There is a $700 billion revenue in this country yearly from the arts. We need a contemporary purpose building here where Zoltar is not belting out his gibberish and where artists can actually display their work,” said Seftel. “We could actually be as professional about art here as we are about golf and cars.”

For her part, Atchison keeps things running and has enjoyed witnessing the bonding between artists.

“It’s great to see the artists working together,” she said.

And for the artists, they just want a community in which to keep creating.

“It’s a real celebration  - we love welcoming the public at large into our space and introducing them to our artists because there’s something here for everyone,” said Donaldson. “It’s a real opportunity to support the arts in many ways and we’re really grateful for the public’s support.”